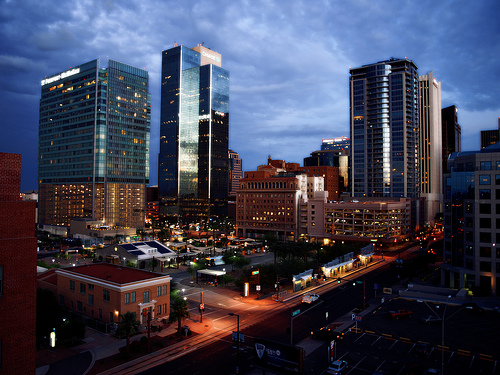 A question that comes up often is, where should you host your dedicated server? To many people, this seems like an odd question, but it can be important for a number of reasons. So why has IOFlood chosen Phoenix to host its dedicated servers? And why should you (or shouldn’t you) choose Phoenix as well?

First of all, you have to consider that the internet is fast, but not infinitely fast. The speed of light provides a limit on how quickly information can travel. Having a server in Phoenix and a website user in Los Angeles, for example, the latency (time between requesting a web page and receiving it) can be as low as 10ms. If the server is in Europe and the customer is in Los Angeles, on the other hand, the latency may be 150ms or even 200ms. As every image, bit of text, etc on a web page requires a separate request, these few ms here and there can add up to a very slow experience.

In addition to distance, you also want to make sure to host in a major city. This is because the fiber optic lines that make up the internet connect cities much the way railways or airports connect cities. The biggest cities are directly connected to each other at high speeds, whereas smaller cities generally have to take a slower path to a larger city before continuing along their way. This gives you a big advantage to performance and reliability if you select a larger city. Phoenix is a major city in these regards, with direct high speed connectivity to Los Angeles, Dallas, and the rest of the country. On the other hand, Las Vegas for example only has direct connectivity to Los Angeles and very little connectivity elsewhere, which impacts both performance, reliability, and cost.

For these reasons, you generally want to host a server as close to your users as possible. If you have a general website that appeals to US visitors, any “major hosting city” in the US is generally fine. The major cities for hosting in the US would be Los Angeles, San Francisco, Seattle, Phoenix, Dallas, Miami, Atlanta, New York City, Ashburn VA, and Chicago. You really can’t go wrong with any of those cities for reaching US visitors. If you appeal mostly to European visitors, any “major hosting city” in Europe is generally fine for your server. Major hosting cities in Europe would be London, Frankfurt, or Amsterdam, although other cities can also be good options there.

As a general rule of thumb, if you have customers in China or Australia, in addition to US customers, a server on the West Coast of the US (Phoenix, Los Angeles, San Francisco) will be ideal. This will provide excellent performance for your US visitors, and decent performance for your Chinese / Australian visitors. For customers primarily in Japan, Seattle can be a good choice as well. If your users are split between the US and Europe, a server along the east coast of the US can be a good option (New York City, Ashburn Virginia, Atlanta). For customers in Central and South america, Miami is an excellent location.

So why have we chosen Phoenix, and why should you choose Phoenix? We feel that Phoenix provides the best combination of performance and cost to all of the US as well as Asia and Australia. Although Los Angeles is slightly closer to Asia, Phoenix is nearly as close and also has other advantages. Specifically, Phoenix has far lower costs, with cheaper power, labor, taxes and a lower cost of living. As well, Phoenix has no natural disasters such as earthquakes, tornadoes, and hurricanes, and so is a very secure place to host your servers. Compared to areas like Los Angeles, Dallas, Kansas, etc, this makes Phoenix a much safer and more secure place to locate your servers. As well, what Phoenix gives up in proximity to Asia, it gains equally in proximity to the east coast of the US, being approximately 10 ms closer to east coast users compared to Los Angeles.

We feel this provides the best tradeoffs in performance to a diverse group of website visitors, while also having the lowest costs and lowest incidence of natural disasters for any major hosting city in the United States. Ultimately, Phoenix may not be the absolute best choice for every customer, particularly those targeting European website visitors. That said, we feel that it is a great choice for anyone whose servers will be used by viewers in the US or Asia, and is a great choice for customers who are looking for a secure inexpensive place to house their data. For that reason, IOFlood has chosen Phoenix to host it’s servers, and we hope you feel the same way.